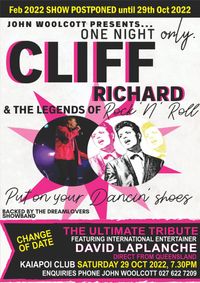 David originally from Waimate NZ now resides in Australia , where he regularly performs shows . Having worked with many well-known NZ and Australian artists he has a following where people love him performing the songs of the 50s 60s 70s and occasionally a bit newer . He has an uncanny likeness in appearance to Cliff Richard and is very popular with the NZ Cliff Richard fan Club who regularly attend his shows . Last time David performed in NZ in 2019 his show at The Hornby Club was completely sold out

He is back in NZ in October November this year . His Kaiapoi show is sold out , but tickets are available for The Hornby Club show on Friday 4th November

Backing will be provided by The Dream Lovers Show Band of whom the members are Des Newton , Kevin Taylor , Wayne Allen and Peter Gillett . If you like good old nostalgic , music you can sing along and dance to , this is the show for you